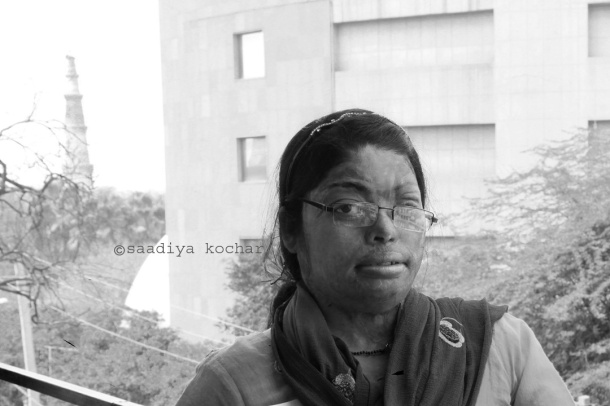 Can you tell me about the incident Archana? When, where and how did it happen?

It happened in 2008, in my village in U.P. There was a guy who was living opposite my house. For four years he was after me. He never said anything but one day in 2008, he just suddenly came to my house and threw acid on my face. He had already consumed poison before he came over and after he flung the acid on my face, he died. I didn’t get to know anything, since I was unconscious. This happened at around four thirty in the afternoon. My father rushed me to a hospital in the city. It was only at around 10.30-11.00 at night that I regained consciousness. We never knew what to do. We never even filed an F.I.R.

What happened after that?

There was a lot of damage. My parents left everything and started staying in the hospital with me. Then we took a room on rent and continued with the treatment. I never returned to my village after the treatment. 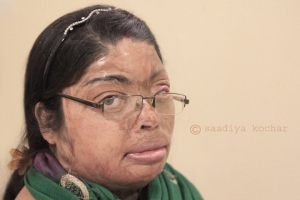 “I wondered why anyone would want to marry a girl like me?”-Archana Thakur, acid attack fighter.

What do you do over here?

I don’t work anywhere, I’m a housewife. I got married last May.

How did you meet your husband?

It was an arranged marriage. My parents got us married. He is my Aunt’s (Bua) daughter’s, brother-in-law. The families spoke and my husband’s brother came to see me. He agreed to the marriage but I was weary. I wanted my future husband to see me first. I wondered,”Why would a guy agree to marry a girl like me?” So he came over and he never asked me about anything. He just said I like the girl. But I was very suspicious. I said to my mother, “I don’t know what ulterior motives have lead him to agree to marry a girl like me.” I was very hesitant, so my parents agreed to wait. I just needed him to know that my body was burnt so that he wouldn’t say anything later. We started speaking to each other, over the phone. That’s when I informed him that my legs and my chest were burnt. He was ok with everything.

Are you happy after marriage?