An ambulance makes its way through the kani jung. 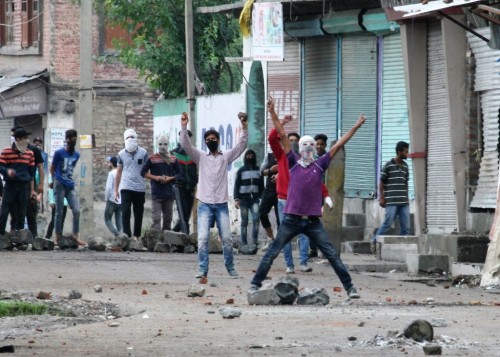 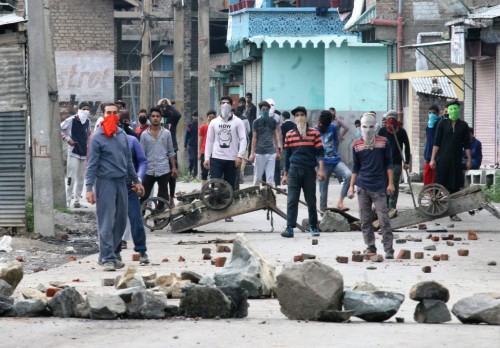 Boys against the force 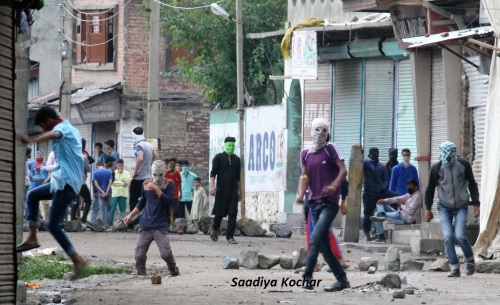 One of the most volatile localities in Srinagar.

‘Behanji aap me dimaag nahin he. Jao yahaan se.’- I get yelled at

Mr T came over this morning. This was his first visit, so over a cup of tea we discussed the ‘haalat‘ and how stubborn I am to be stepping out by myself. ‘ Where can I take you, today?’ he asked. ‘SMHS’, I replied. So off we went in an auto to the hospital, where I was threatened on my last visit. I didn’t want to go there alone, to be honest-so I was glad for the company. We took the back entrance, to avoid any unnecessary attention. Before we could enter the building, I heard a familiar voice, ‘Kesi hain aap?’. There stood the lady who forbade me to enter the wards, on my last visit. With her arm stretched out, she gave me the sweetest smile. I shook her hand hoping we wouldn’t be stopped again. It was my lucky day.

Considering that there are talks of replacing the pellet gun, it’s shocking that even now fifty-one days later, the situation at SMHS, is still grim. The papers claim that there are a fresh round of pellet injuries and more than thirty people have been hit by the pellet in their eyes. We enter the ophthalmology ward and from little children to young boys can be seen wearing those dreadful black glasses, masking their eye injuries. I keep my head bowed, my eyes to the floor and my head covered. T does the talking. When they ask him where I’m from in Kashmiri, he just replies ‘Times Of India’. They leave me alone but continue to question him. For about ten minutes we move from bed to bed as quickly as we can, barely interacting with the subjects and leave.

A child tries to sleep through his pellet injury.

I come back to the hotel and he leaves, saying he will call if anything happens. A little while later, I go back to SMHS. This time to see what is happening on the volunteer front. By the time I reach it’s lunch time and all the organisations that had been there over a month ago, are still there providing-food, medicines and water . I speak to a few people who say, it’s still quite terrible. A lot more people have been admitted in the past week and everyday it seems someone passes away.

On the way back, I’m dropped off by a very friendly twenty four year old auto driver, from Safa Kadal. ‘The CRPF uses us as human shields in our area. I leave the house early in the morning because I’m tired of being confined. You all keep saying that the Hurriyat pays these boys to stir trouble. Do you know it’s the opposition parties that pay their people money to stir trouble? They all just want money and power. The only person who gets into trouble is the sixteen-year old boy, who doesn’t belong to any party. The ones who are affiliated  even if they are caught are set free in just a few days . We have a jail, we have our own law and yet the boys are sent to Tihar. Punish us if we are guilty but first at least file a case and prove that a person is, don’t just keep him in lockup for years! ‘

After his passionate monologue, all I can say is ‘may God make your tomorrow better than your yesterday.’ Get dropped and I’m informed by my people that there’s trouble in Batamaloo. As soon as I reach there, I find Mr T and a few other members of the fraternity. T is taken aback. ‘ How did you get to know’, he asks. ‘I have my sources, T’, I reply grinning sheepishly. There are stones on the street but no boys and no JKP around. Within ten minutes they start trickling in. As soon as I start taking pictures they ask, ‘Apne boyfriend ko dikhaee gee?’ In no other part of Srinagar, has any stone pelter done this but these guys love me. ‘Ye dekho madam, aap kehti he bacche he. Suno inki bate,’ the armed personnel are pissed. T is embarrassed by their behaviour, ‘you stay back’.

Maybe I am too close or they are way too agitated but for the first time in nine years the stones touch my body. I suffer absolutely no injury, one fall on my foot…the other hits my leg, gently and one whisks past me, twenty inches away from the head. The only reason it bothers me is because I can’t figure out if it is accidental or intentional. One of them eventually yells out ‘Behenji aap me dimaag nahin he. Jao yahaan se.’ Since T has left, the SHO is yelling and so are they, I decide to split.