They say after a certain age our faces become roadmaps of the lives we’ve lead. Looking at Merry’s face one can never imagine the life that she’s lead. In her 60’s, she comes across as a chic 45 year old, with an inexplicable joie de vivre.
Here are excerpts from a conversation with the Director of AFA; an Ashoka Fellow, about her life.

How did you get into the area of special needs, particularly autism?
I was working in the field of special needs after college. But never thought of it as a career. I only got into it full time after my son received a diagnosis. Though not right after. Initially, I was trying to find out more about the condition. To learn what autism is all about. But I kind of got into it full-time 25 years ago.

Twenty five years ago where there a lot of places where one could find information about autism? What was it like for you at that time?
When Neeraj got the diagnosis, which was more than 25 years ago, there was no place a person could turn to. People really did not know what autism was. A handful of places knew about Autism but they did not know what that really meant- what a person with autism was really like? What were their needs? What were their strengths and difficulties? When I started out there really was not there anything in the country on Autism.

Was it very difficult to lead a normal life at that time? There are a lot of people who have a victim complex and yet when I look at you, you come across as a normal happy go lucky person. It translates into the organization you run and the relationships you have with your co-workers. Did you ever feel like why was all this happening to you?

Initially before I knew Neeraj had Autism, I did find life very difficult because I could not understand why I was not able to do the kind of things and be the kind of mother that other mother’s were. I kept thinking that once he’s a little bit older he would outgrow all of this. I just thought that maybe my son was a little slow and that was all right with me. But when he was diagnosed with Autism, I would say that for a month I was in a bit of a daze. For the first time I realized that the life that I was leading was going to be my life forever and that was a bit of a shock because till then I had thought this was going to change. I never thought why is this happening to me because I know that nobody has a perfect life and perfection is a very relative thing. The other difficult bit was after the diagnosis I wanted information about how to help my child which that was absent. It was like being thrown into a void and not knowing what I could do to help my son with something called Autism and you just sit with it. That inaction was what I found really hard to deal with. 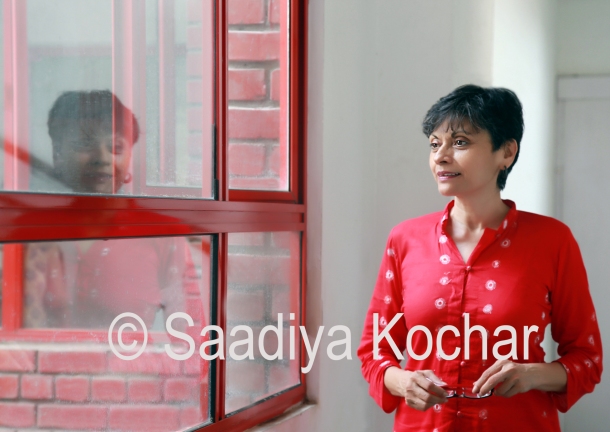 So what did you do after the diagnosis?Initially, I went to the American Library and the British Council library in Calcutta, where I was staying to read up on Autism. There was nothing there. So I called up a friend who was a doctor in the U.K and told him about the diagnosis and asked him to send me some literature. He sent me a book, which when I think back now, was very basic. But it was like clutching at straws, having something to hold on to. Even internationally there were only a handful of books that had been written about the disability. It was only in the 80’s that the awareness spread at least internationally.
There were three instances that changed it- One was that in the U.K Dr Lorna Wing who was also a parent talked about the ‘triad of impairments in Autism’ and that made us sit up and think about it. The second was the film Rainman with Dustin Hoffman which did an exceptionally good depiction of a person with Autism. However, not all people with Autism are like that and not all people have special skills like Raymond Babbitt did. The third thing; a very important one which I did not get the benefit of till another 6 years later, was a book called ‘Emergence: labeled Autistic’ by Temple Grandin. She was the first person with the disability to write a book on what it was like to be autistic. When I read her book for the first time I thought, is this what my son experiences? For the first time I started to understand Neeraj. These were the things that began to change the world in the late 80’s.

Was diagnosis also harder because of the large spectrum?
There are a lot of people with autism who in earlier times use to get a diagnosis of intellectual impairment. Even now what happens to people who are in two ends of the spectrum, they get misdiagnosed. The very able ones get misdiagnosed as stubborn, willful or arrogant people. There is a serial called Big Bang Theory and the character of Dr Sheldon Cooper (it’s not mentioned that he has aspergers) is described on the Internet as a person who plays the role of an arrogant physicist. That’s it! A lot of the able ones get this kind of diagnosis. However, those who are on the other end of the spectrum get a diagnosis of intellectual impairment. In India, definitely a lot of people even now are not receiving the correct diagnosis.

Did you ever try sending Neeraj to school? What did you think of the schooling system?
Initially, Neeraj went to a nursery school before he got a diagnosis. All he would do is walk around the class and walk around the playground. He wasn’t learning anything there. The school was happy to keep him but they also said this is what he does and we don’t know what to do with him. I tried various things in between and then put him into another mainstream school. Neeraj does a lot of flapping of the hands, so a person from this particular school said to me that he was very violent and they couldn’t keep him. So mainstream schooling did not work out. Now, someone like Neeraj would have been permitted or maybe not! Since he had a lot of challenging behaviors- like shouting, throwing things etc. He attended four schools before I got myself trained and opened up Open Door. 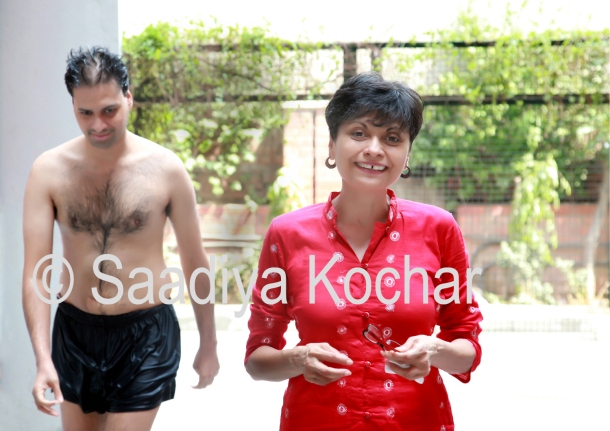 Was this hard on your marriage?
I wouldn’t say Neeraj was hard on our marriage because my life had become Neeraj. Especially, when your child has very challenging behaviors you’ve got to really focus. I was the primary care giver, I was teaching him communication. I was teaching him to develop a social understanding. So I wouldn’t say that was hard on our marriage. For most families (not all), the mother ends up being the primary and the only caregiver.

Where did you receive your training and why did you decide to go for it?
After the age of ten Neeraj’s behavior became fairly extreme. So life was very hard at that point. All the reading that I was doing made me realize that people by and large did not understand Autism. I wanted to help change this terrible trap that we had got into; we were hurdling towards a phase where I wouldn’t have been able to help him at all. That’s why I went for a training to the Sun Rise program, which people found fairly controversial ( I didn’t). They used a lot of structure, behavioral principles etc. But the most important thing is that it was based on a very strong respect for the person with the disability. When I came back I worked with Neeraj using these principles. When I saw the changes I decided to work with another young person, who needed help. Realizing how important structure was in their life, I went for another training to ‘Division TEACCH in North Carolina’. Open Door started as an experiment and then it just took off. Now, it’s not so much a school as it is a place for training; it’s a place for developing strategies and a place for sharing.