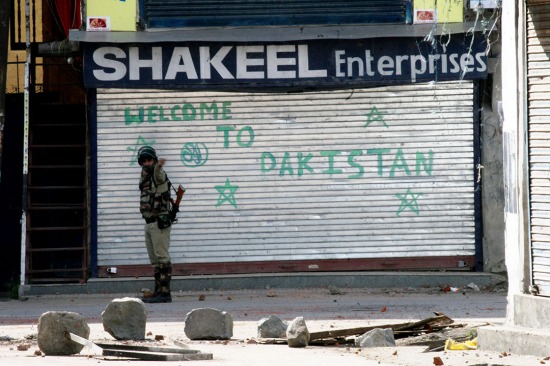 Calling the CRPF for engagement. 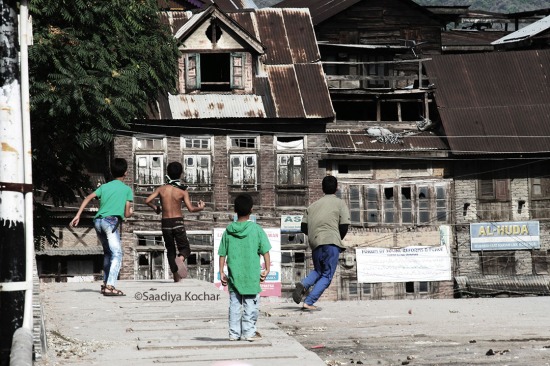 The older children try to entice the CRFP, while P.K. watches them. P.K is a 5 year old boy, who engages in this activity because he wants ‘freedom’. Ask him what his name is and he says ‘Mera naam Burhan he.’

53rd Day of Unrest in Kashmir.

The forces make their way back to the area.

A boy checks on the lane behind me to ensure, I don’t get hurt. 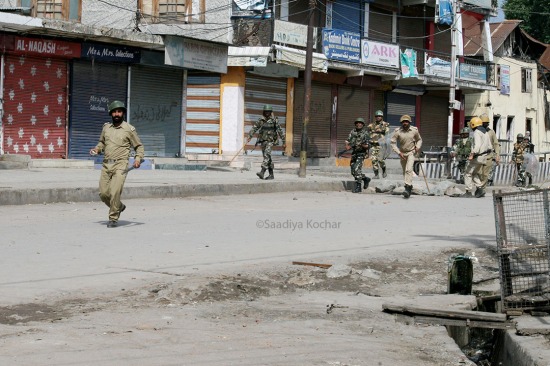 An older man takes me to his house to show me the wreckage after a nocturnal search. Damaged windows, appliances and a stench so terrible, that from the moment i stepped in, I had a hard time controlling the cough.

‘Aa maar hume pellet’, yell the boys, while the one with an already existing injury, advances forward.

Kaini Kadal-‘Non-lethal’ methods of crowd control. While the boys yell out ‘kalia, kokur-ch%#dh’ as insults, the armed personnel retort with ‘CRPF ki aulado’. 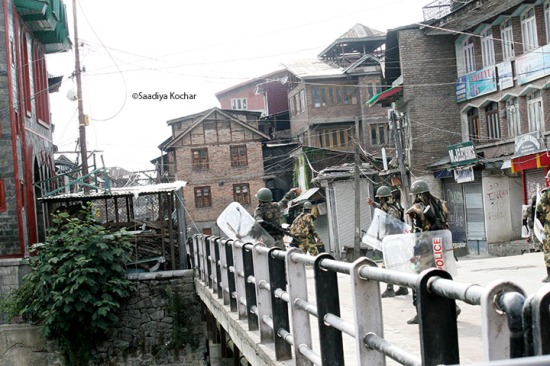 Retreating the boys run inside the smaller lanes and the armed personnel begin pelting stones.

A couple of boys move towards the Karan Nagar side. 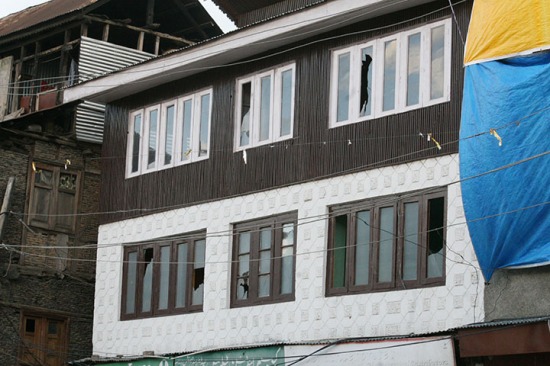 After the crowd has dispersed, on their evening rounds the JK police pelts stones on a house. A girl screams from the adjoining house,’ Ma’am when you go back, please tell them we are not terrorists but freedom fighters, like Gandhiji.’

After spending an entire day, watching what they called ‘chua-billi ka khel’, I head back. As I do, the armed personnel try to remove the blockage.

‘It has happened and it goes on happening and it will happen again if nothing happens to stop it.

The innocent know nothing because they are too innocent.

The poor do not notice because they are too poor.

And the rich do not notice because they are too rich.

The stupid shrug their shoulders because they are too stupid.

And the clever shrug their shoulders because they are too clever.

The young do not care because they are too young.

And the old do not care because they are too old.

That is why nothing happens to stop it.

And that is why it has happened and goes on happening and will happen again.-Erich Fried.

‘Ji khabar aee he…pathrav ho raha he Keni Kadal me,’ says the voice on the phone. It’s 10 a.m on the 30th of August, the 53rd day of Unrest and I have decided to miss my flight. The government has lifted the curfew but the shops are shut and according to the calendar the women are supposed to gather at the crossings.

Though, there  are autos on the road, not a single one is willing to take me there. A little further away from the Police station, a ‘kani jung’, has been dispersed and the CRPF are searching for the protestors. I wait a while and then ask a passerby how to get to Kaini Kadal. He’s kind enough to walk with me. ‘Aap akele na ghumme yahaan. Aadmi ke saath chale. Haalat kharaab he,’ he says concerned about my well-being. ‘Aadmi kyaa karega? ‘, I ask him. ‘You could get lost, it’s best to be with a man who can guide you. I will take you till there but be careful.’ We walk for a bit, people ask him who I am and where he’s taking me. ‘She’s just a lost tourist’, he replies in spite of knowing, otherwise.

We reach the area, which is close to Habba Kadal and Karan Nagar. As we reach the bridge, he stops next to a few boys and says, ‘Ye aa gayaa aap ka Kaini Kadal. Khudda Hafiz.’ Since there faces aren’t covered, it takes me a minute to realise that I’m standing in between the protestors.’Aap uss taraf jao. Photo nahin kheechna, yahaan se,’ says a ten-year old boy. I walk across the road towards the CRPF. Now I’m on the Habba Kadal, side and there seems to be an entire battalion there-rakshak cars, police vehicles, Jk Police and the CRPF. ‘So many for a handful of children’, I think to myself. I walk around and wait…I wait and wait. It’s around 11.30 in the morning. The ex assistant calls to ask if I’ve found my way and to call as soon as I reach the hotel. The forces ask me where I am from. ‘Delhi’. ‘ Where is the rest of your team?’, they ask. ‘ I’m alone.’ ‘Darti nahin ho, kyaa?‘ they ask in disbelief.  ‘Kyun aap nahin darte?’,  is my only retort to the silly question. Everyone feels scared, whether they admit it or not!

I sit down on the steps of one of the closed shops. A middle aged Kashmiri man joins me. ‘ Chotti yahaan mat beth. Humare ghar chal. Chai pi.’ Kashmiri hospitality at its best. I politely decline the offer. After the basic introductions, we sit around chatting about the state of affairs. ‘Tu jis cheez ki wait kar rahi he, voh jaise he ye gadiyaan jangee tabhi hogi.’, he informs me about the impending circumstances. A family cautiouly steps out from the house, opposite to where I have unceremoniouly parked myself. ‘ Please come to our house, incase you need anything. Bathroom, jana hoga to, aa jana. Just because the circumstances are such doesn’t mean we have forgotten how to take care of our guests.’

Slowly the Rakshak cars and seventy percent of the troops head back to the camp for lunch. As they make their way back, one asks me to come along. ‘ Madam, chalie khaana khaeye.’ I decline the offer, though in retrospect I think it would have been an experience breaking bread with the men, who spend their lives trying to protect us.

If you’ve never been to Kashmir, you can’t imagine what a sight a woman wearing cameras around her neck, sitting alone on the steps of downtown is. By the time the Zuhar Namaaz is over and the troops have left, it has been mentioned in the Masjid and half of the locality comes to check me out. I meet all kinds-the kind ones, the hospitable ones, the agitated ones, the curious ones and the suspecting ones and I am truly intimidated.

In between all this, I am handed a cup of tea and roti by the family. The usual questions  ‘Where? Why? How? Saadiya what?’ The standard reply- ‘Kochar..I’m  not Muslim. I’m a Sardarni!’. Nowhere, do I  ascertain my Sikhi more than in Kashmir only due to the unfair advantage my first name grants me. A loudmouth starts to articulate his displeasure with me in English and some of the sceptics cheer at his fluency.  ‘I don’t appreciate your tone’, is all I say when he begins to ask me for my I.D. ‘Don’t stammer…don’t stammer!’ I tell myself. Right on cue, an older gentleman appears and asks me to come to his house. ‘Kal se press valon ko phone kar raha hu. Koi nahin aaya.‘ Thankfully, the ex assistant calls. ‘Someone wants to take me to their house. I’m going, ‘ I tell him. ‘Let me speak to them’, he says panicking. ‘ Please take care of her,’ he tells the boy who escorts me. ‘Don’t worry she is our sister,’he replies.

Off I go, through the lanes with a small group into a house. As soon as I enter I can’t stop coughing. There are broken appliances and clothes on the floor. ‘They came to search for our sons, saying they are pelting stones. When they couldn’t find them, they broke everything. I don’the know why the SHO is targeting  just my family. The Jk Police tortures us more than the CRPF,’he claims. A few short interviews later there’s a panic.  ‘Police..police!’ yells someone outside and a member of the group runs down with my bag. I run after him but I am blocked. Within a few minutes, my bag is returned and there are no cops.

I am escorted back to the Kadal ( bridge)  where I wait in anticipation. A five year old boy in a green shirt, glides towards it and starts to block the road. ‘Wo aa gaya P.K. Iska bhai 10 saal ka he aur jail me he. Iss ko bhi le ke gaye the station. Chaud diya,’ an adolescent informs me. ‘Ask him what his name is?’ I call P.K and ask him what his name is. ‘Mera naam Burhan he!’, he says. ‘Humare naam roshan karega!’, smiles the adolescent proudly.

And then suddenly everything starts moving at a crazy pace. They appear from nowhere…5 year old..10 year old.. .15 year old…20 year old boys. They all seem unfamiliar. ‘Jo jahaan ka hota voh wahan par nahin karta, protest’. They block the roads and then the younger ones run across the bridge to entice the CRPF and sure enough they appear. Fully covered in front of fearless, abusive children.

There are various groups divided between Habba Kadal, Kaini Kadal and Karan Nagar-each only a kilometer away from one another. I glide between both the Locals and the armed personnel..arousing the suspicion of both. By the end of the day, the boys have had enough of me. One of them sends me off to sit with the ladies under the bridge. They fuss over me. Thankfully my phone doesn’t quit ringing and I hand it to them to answer and inform people of my whereabouts. It’s just a precautionary measure.

The boy in the red mask appears without his mask. He enquiries from the ladies (in Kashmiri) if I have been taking pictures from that particular spot…have I been asking them any questions about the boys. They reply to the negative. Then he begins to question me…ultimately he gets agitated. ‘Tu police walli he kyaa?’ I nod. ‘To phir itna jigara kese he?’ ‘Sardar hu iss liye!’ But he’s unconvinced. My meekness doesn’t help so I do what I do best- Behave like a drama queen- ‘Ye le mere I’d.  Mere ghar ka pata he, agar police walli nikli ghar me aa ke maryo mujhe.’ That’s too much for him to hear. ‘Do you think I want to hurt you? Nobody will say anything to you but go away now. Stop taking pictures. Enough.’ Actually, after spending a day there, I have had my fill!