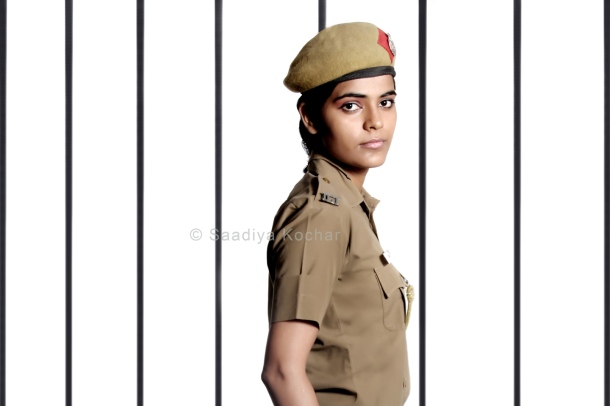 She caught me by surprise…this one. I would have never guessed that this struggling model, with a typical haryanvi accent- that made her feel like a misfit in a modeling class; was actually a constable at the Tihar Jail. A chat with Sarita who never told her classmates what she did for a living.

What made you get into this profession? What was your parents reaction?

I’ve always wanted to join the police force because my father was in the same profession. Just took an exam, cleared it and here I am. Initially, my father wasn’t against the idea… he didn’t think it was a ‘nice job’. But my mother was happy because she thought my daughter has a ‘sarkari naukri’.

Do you come from liberal set-up? What do the other female members in your family do?

No, I come from a conservative family. My mother is a housewife and my elder sister is a teacher.

What do you feel about working in Tihar? How long have you been working there?

I’ve been working for four years. It’s just a job that’s why I’m doing it.

But there are many jobs that one can do? Has anything good happened to you on the job?

In most jobs one has to work. Over here I just have to take care of the inmates. Everyday, something happens due to which I regret working here. The people we spend our time taking care of don’t respect us. They abuse us and sometimes even physically assault us. A number of times I have been physically assaulted because I’m doing my job honorably. Once, at the ward where I work I confiscated some mobiles. The inmates turned against me and I had to run away because fifty women came to assault me. I can’t really say that anything good has happened to me, here and after a while I will quit.

Have you complained to anyone about the physical assaults?

I did complain to the head of department but to no avail. If we make the slightest mistake or there’s a mis-happening due to one of the constables, immediately there’s an enquiry. But if anyone misbehaves with us or beats up no action is taken. I have written an email to NHRC but nothing. I don’t discuss these matters with my parents because that will just upset them.

What are your aspirations in life?

I want to be famous and famous for something good. I want to do something for myself where I gain some respect. Me chahtee hu ke jab me maru to aisa na maru , ke kissi ko bhi pata he na chale! I want everyone to know who I was.