Ladakhi student at the stand with Jammu and Kashmir, protest yesterday.

Brinda Karat at the protest against the abolition of Article 370.

Shehla Rashid Shora at the same protest, giving an interview to the press.

On the fourth day of the Kashmir lockdown, Ghulam Nabi Azad was stopped at Srinagar Airport and sent back. Prime minister Modi , reassured people in his address to the nation that the Union territory status, is temporary and the locals would be allowed to celebrate Eid. Kashmiris remain cut off from each other, as well as the rest of the world. News of hundreds injured and six dead, somehow manages to reach the mainstream media. A number of separatists are said to have been shifted out of the Valley, while Kashmiri diaspora organises protests in London and Germany. Nitasha Kaul, an eminent Pandit, speaks to the international media against the abrogation of Provisions of article 370. Kashmir is said to be the most dangerous place in the world at the moment and tomorrow I will be stepping into it. I’m assuming this is my last post, till, (if) I return. Godspeed. 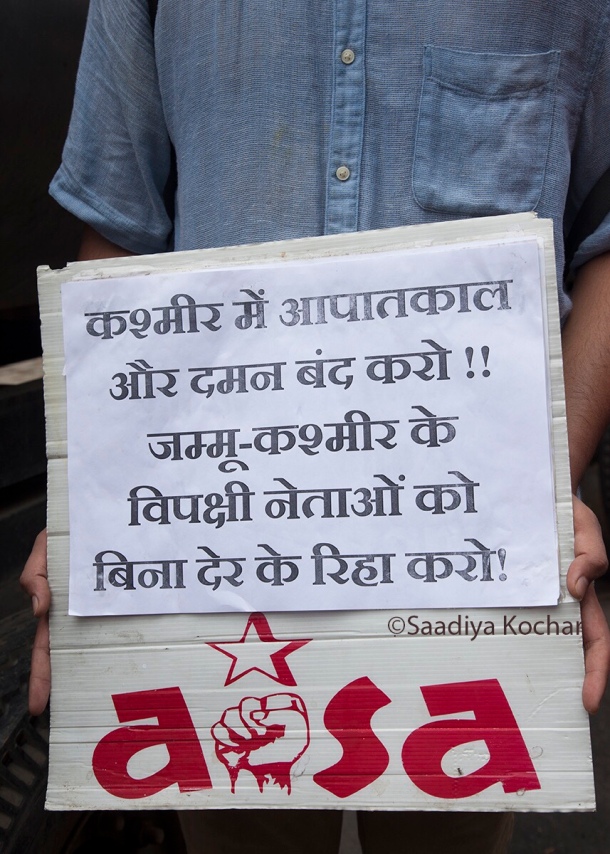 Protests against the revocation of article 370, were organised in New Delhi by the Left, on the 5th of August. Article 370 was sprung on the people, revoked by the BJP government, just the way demonisation was unceremoniously sprung on the whole of India. This decision taken in haste has already lead to deaths in the Valley.

From unofficial sources, news is spreading ( since all official means have been shut down) that the Rashtriya Rifles are present on the streets of Kashmir. JKP can’t be seen anywhere. Rumour has it, that in Noorbagh area people tried to break the curfew. The locals only became aware of the revocation, when the announcement was made in certain masjids. Cable, mobile, even landlines are snagged. A doctor has confirmed three to four deaths and apparently there is stone pelting taking place, in certain parts.

Meanwhile, protests take place in different parts of the world against the revocation. In the University of Dhaka, the students carried on a protest, a US based Muslim organisation is going to organise a protest, too. Whereas Pakistan has tried to get the support of Turkey and Malaysia. Even in India, various organisations are dissenting against the move.

On the flip side, news is filtering in that most people in Ladakh, have welcomed the move to bifurcate the state and turn Ladakh into a Ut According to them- Ladakh was being given step motherly treatment. The funds that were supposed to be given to Ladakh, were being given to Kashmir. Educational institutes, funds, jobs were being given to Jammu and Kashmir and basically development would take place after Ladakh, would be totally integrated into India.