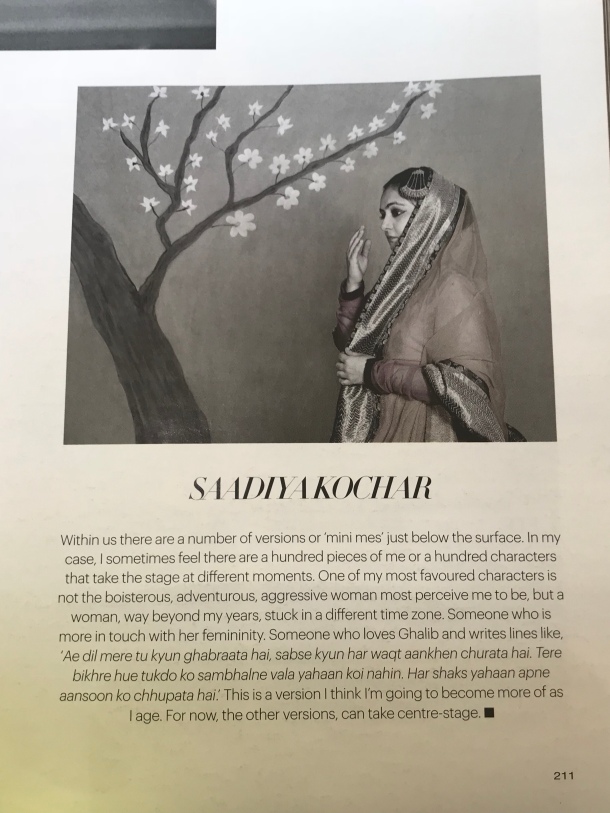 As the first public display of Photowalli Gaadee nears the end, one is so impressed with one’s own ability, to mingle. Driving over 16k kms is easy peasy compared to socialising, for this pokey creature. One finds oneself missing having a man, for this purpose. Did I forget to mention that the only common traits between the men I dated were- fabulous memorising abilities and great social skills? I have been unconsciously compensating for my lack of both, I guess.

Anyway, since neither the brother nor the boy nor the bodyguard were there to hide behind, one has handled all social protocols as well as one can, but of course with a few goof ups like forgetting to invite a lot of people. That’s ok, I guess.

To sum up for now, there are things one has learnt from this experiment.

About the work- 1 out of 10 people who walk into an eatery actually care about what hangs on the wall.

The people who do care are curious enough to want to know more.

The intellectuals and the liberals seem to appreciate the work. ‘You keep screaming, till they get it!’ one said to me.

Interestingly, most people like the same photographs in order of preference and for the same reasons.

About people- In my head, I’m constantly amused and frustrated in equal measures by most people but I am most entertained by the practical! It never ceases to amaze me how tangled their thoughts become with my impractical ways. Of course they are the ones who want to know the logistics, the conversation rotates around the Moolah baby. How much you have? How much will you spend and how much will you earn?

About myself- It seems one is starting to loose one’s ability to maintain the poker face. One had perfectly, mastered certain expressions and phrases, which due to tiredness or ill health have been failing me, the past couple of weeks.

SC, who has been kept under the radar for a while, has been frantically trying to get out, I guess. So, of course she has had a very tearful reunion with one friend and totally contrary to SB burst out laughing and spilled coffee on herself when someone was trying to mock her. That’s why I like the other one more, she’s better at playing dumb and giving it back lock, stock and barrel.

So, it seems one will be taking this body of work around. Though, when one does realize it’s of no consequence, in the long run. If there is anything one has learned from her travels -one on one all human beings are tolerant. Put them together and then watch tamasha. One does wonder then, what is a person’s true nature? That which one is, when one is alone or what one becomes, in a herd? Also, if intrinsically we did not want to be surrounded by homogeneousness, to make ourselves feel safer in the first place, wouldn’t it be harder for people to manipulate us, into hating each? The acceptance and the hate exist in equal proportions, though people who have lead more tumultuous lives, I find are far more tolerant. 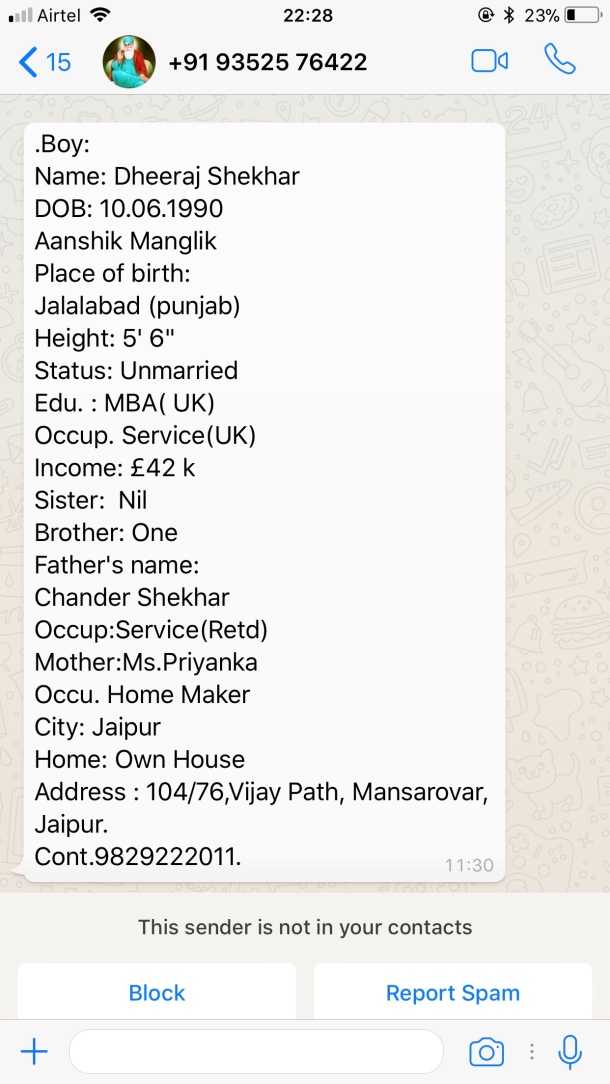 This is more for my amusement and less for your information. After my trip, of course I have gotten accustomed to random messages, as have people gotten used to getting blocked. But this was too funny for me to not save for posterity.

A number of my male friends, have unfortunately gone through this process. I am just wondering, what the fuck do people make out of this nonsense.

What do you do when you are sleepless, yet too exhausted to work or read? Not what you’re thinking! The rabbit has been put to rest since the beginning of the year. One is channelling all the pent up energy and of course the enormous ego into work. A month from now, the rabbit will come out of the hole and Gadhadhari Bheem ( a nickname I was given during a shoot) shall become shaant.

Back to the point…checking out random posts on Fb. Chanced upon the post my chic Bengali friend had shared- a debate on NDTV: No country for single women? Apparently, there has been a 39% increase in the number of single women in India since 2001 and at this moment, there are 12% single women in India. There are a number of women I know, who have never been married for various reasons, one of the most important being unable to find a mate who is as well educated or well settled, as they are.

Why am I single? Well, one is such a pleasing concoction of being commitment phobic, more than a little nuts and when in love, oh so clingy- like a guy. Uff and so in love with the chase. I don’t particularly care who plays cat and who plays mouse, as long as the game is interesting. Also, dude when I hear married women speak about their lives, I find myself thanking the boy for his ambiguous ways. Blessing in disguise! I literally know only a handful of married women who look happy to me and no, none of them are married to rich men!

The debate on NDTV, with a panel comprising – Sreemoye Piu Kundu-author Status Single, Deepa Narayan, the author of Chupp, Sanjay Rajoura stand up comedian, Shikha Makhan film maker, Kanika Tekkrikal, Geet Oberoi- founder/ president of Orkid and a couple of other people, is worth a watch. For all of us, single women it is just reaffirming our realities. We are all used to terms like ‘ slut’, ‘ lesbian’, ‘selfish’ and ‘arrogant’. Arrogant we are, for knowing we can live our lives according to our own rules! 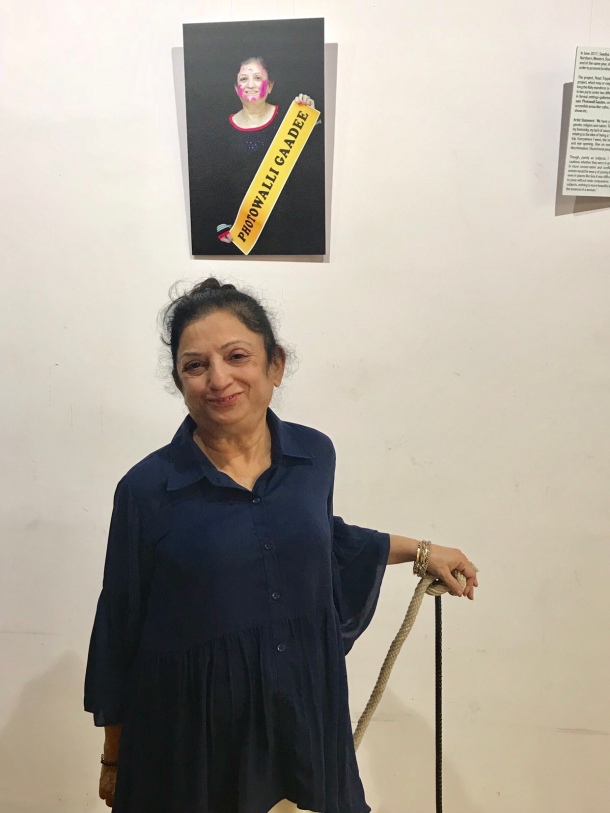 This year I skipped the usual format for celebrating women’s day because we were all busy at the first public display of Women by Photowalli Gaadee.

This year’s exhibit is an ode to the one who has made me…look at the cutie in the picture…my Mommy. As the show will be on till the 22nd and I will be busy so bare with the irregularity of posts. I find my attention swaying from this to the other, at the moment.

It’s been an interesting exercise, up until now, an experiment if you please, on varied levels. A social experiment- as I hate this part of being a photographer, conversing with other humans. Also an experiment to gauge reactions, which I usually don’t give a rat’s ass about. Since, this project is a concoction of photography and about sending out a social message, one wants to observe the reaction of the viewer. So, let’s see how that goes.

The other day Dad and I were discussing about one of his clients and he said to me,’ You don’t get it. Most people perceive as very mysterious. They are very curious about you because you are not stereotypical. Sometimes, they like to deal with you because of this reason and most of the time they like to talk about you, for the same reason. That’s just the way it is!’ It had an air of finality, his statement. Like, you just got to live with it! I was told the same thing by a spiritually inclined lady, more than a decade ago.

So, does it bother me? Hmmm. Honestly, after three decades, I’m still not used to it. It does make me furious sometimes, when people comment on my sexuality because they can’t figure out how a person can look at both men and women with the same level of fascination? Or when I get labelled a cougar because I openly claim to like younger men. Come on, I dated the older ones before I hit 25. It’s not just my love life, people have been strangely curious about what I do, how and with whom. I don’t make it easy, I guess, with a nature which is ambiguous.

Am I going to change? Well, you know what, about an hour ago, I drove into my petrol pump ( not mine but since I am a creature of habit, I have a favourite gas station, fav flyover etc etc) and just as the car came to a halt, I realised who was parked right next to me. One guess, yes! So, I turned my head, as much as I humanly could to the other side, to avoid looking at him. The ghost of my past, sat perfectly happy with someone, who looked very familiar, in his God forsaken car.

‘Stay cool’, kept mumbling SB, repeatedly. Of course, as soon as he drove away SC, went nuts. So, Super Clingy, who was at the forefront of that relationship, is the one to blame for this nonsense. If Super Bitch, had been allowed to come out more often, like most of the men she encountered in her life, this one too, would have been chasing her, like there’s no tomorrow. But no! He saw the other one with such frequency, begging and begging and begging some more, ‘ please, please, please ‘ that he and I both forgot, it was just one tiny version of me. Of course, he only saw that in private, since in public all the versions of me, want to play, stud.

So SC has of course gone to the dark place she frequently visits, crying her eyes out and mocking SB, ‘two days, it takes you, two days to get over, everybody. How long has it been, almost four years, since the last time you saw him?’ ‘ So out of billions of people, only the memory of three has been tattooed on my body. Big deal!’ replies SB. I love this one, she keeps me going.

And about being a mystery, only once in my life I have tried not be. I was predictable and as easy, as it was possible for me, to be. I really tried my best, as much as I could, as hard as I could and as long as I could. I wasn’t perfect, I made plenty of mistakes but God knows, I can’t try harder than that. But I failed, miserably. So, I don’t want to, anymore. Plus, I don’t want to be with someone who gets me. I want to be with someone who will try to and then keep it a secret from me, how much he gets me because knowing me, I will upset the apple cart, if he tries to tell me, what he gets.

But tonight, all the versions of me, just need a drink and SC needs someone to tell her a fairytale that will put her mind at ease.