Ankur Narang Bhatnagar lives in Jabalpur. She completed her M Phil in English Literature and went on to work at the Fullerton India Credit Company.  When she quit in 2012, she held the position of Location Manager.  Ankur is currently occupied with the upbringing of her one year old daughter, Amaaya.

What are your views on feminism?

Feminism to me, unlike it’s dictionary meaning is not just a movement, or an ideology that needs to be established or used as a tool to facilitate a woman’s place into this world. Rather it is the Best Celebration one can have of that profound Energy which every single Woman on this planet is born and endowed with… ‘Power ‘not just in the physical sense but that rare Power of the Liberated Heart, Mind, Body and the Spirit !! Feminism to me is- Pride.. a sense of Being… a State of Existence which is so exotically layered that mystics, writers, philosophers, artists and scholars have not been able to explain it in its full measure across centuries. It is Wisdom, Grace, Beauty, Color and the Vibrancy of Life. A Woman encounters Challenges/Questions/Apprehensions on her very being/her choices/her wishes and desires since very early in life, she remains marginalized by a largely male dominated set up but there’s something in her soul that sustains her through every single of those denials that life, people, conventions and society send her way. For that, she is Special! Both God and Nature outdid themselves when they created ‘Woman’… for she is the creator of Life and capable of sustaining that miracle on a day to day basis ever after. She has enough strength in her to choose and fight her own battles on societal pressures, restrictive mindsets and institutional hurdles and win them too! Feminine energy is almost a synonym of that Divine Energy that knows no bounds, remains unexplained and yet exudes such power and influence it almost seems to be holding the entire world together by its sheer magnetism and charm.

If there was a code of conduct for women what according to you should be the rules?

Be there … Don’t ever let Time, Space or Distance come in between
Don’t Judge one another
Let go offand Crazy  petty Expectations and Forgive easily
Don’t Compete…Compliment instead
Be honestly Neurotic and Crazy when around your girl friends.  It is the most soul satisfying thing you’ll ever know in your life!! !

Tell me about one woman who has inspired you ?

If I were to name just one woman out of so many that have touched my life and enriched it beyond measure I would be unduly differentiating between them. To list a few, my maternal grand mother ( whom I never got around to see because she passed away, well before I was born) is perhaps the first woman who has inspired me…in her ability to stay humble, to be there for people despite her own limitations and to smile even when bogged down by life and circumstances. The second woman to make the most profound impact on me would be my own mother. She remains undaunted through whatever life has sent her way! She possesses a will power so strong she could turn the worst coming towards her and her children away!! She is a wonderful human being with a heart of gold always willing to cast its shiny stardust on those who happen to touch her life! I am inspired by some friends of mine who perhaps did not get the best of childhoods/upbringing either materially or emotionally, but who have not let that embitter them from becoming great human beings. They enrich my life with their innate goodness and warmth and prove that no matter what your past and its limitations have been, it is the present that matters and needs to be lived well and with dignity!! Despite coming from deficient backgrounds these women have ensured they gave me the best of their love and friendship and always had my back through thick and thin. On a broader level, a woman of substance I remain inspired with is Maya Angelou.People who read her work and know her life story would know why she remains an endearing inspiration to many. Closer to home, I guess it would have to be Ela Bhatt (pioneer in starting the Self Employed Women Association, SEWA), Chanda Kochar- MD and CEO ICICI Bank and Nirupama Rao, India’s first full term Foreign Secretary and the first female spokes person for the Ministry of External Affairs. 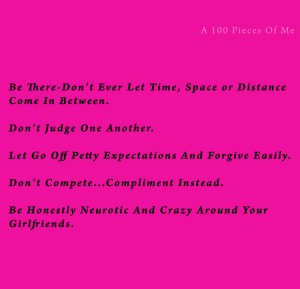 The Feminine Code By Ankur.